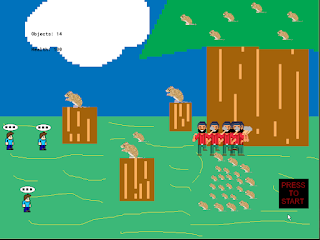 ELLIOT’S PLOT LINE
Once upon a time…

The Oregon Old Growth Forest was full of hundreds of trees full of thriving tree voles. One day, a logging company came along and started cutting down their trees. Now, 100 years later, in the year 2075, there is only 1 tree left in the forest. Now, life for the voles is hard when they fight their only 2 enemies: the loggers and the predatory spotted owls forced to live in the same tree as the voles. Help the good tree voles save their home from the loggers as you play a brave vole named Bob. Bob also tries to signal to the good humans that they are in grave danger from the only 2 things that surround them, the loggers and the evil voles. Bob has successfully communicated with a few humans, and they can convince a few loggers each to stop cutting the trees, and will also plant more trees so they can have a better home. Bob has lived in many different trees, all of which were killed by the loggers. He has a desire stronger than the other voles to destroy the loggers, and needs help fast!
at January 07, 2019